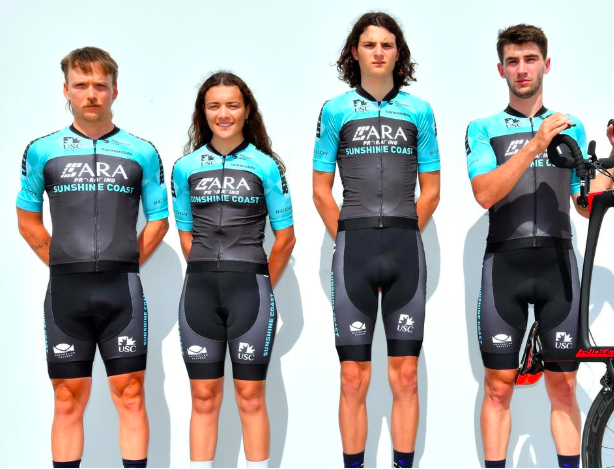 ACA Managing Director, Ben Kersten, said the partnership with the ARA Group is a huge boost to the program.

“We are thrilled to announce a 3 year presenting partnership with the ARA Group. The ARA Group is an incredible employee owned and operated organisation with over 2000 staff across Australia and New Zealand which specialises in building and property services.

“We are ecstatic to have such a large and reputable corporate partner with us to continue the success of the work we have achieved over the past few years. The ARA Group shares many closely aligned values to the ACA including hard work, community, education and sustainability which makes them a perfect fit for our team.

“This partnership and the launch of the ARA | Pro Racing Sunshine Coast Team Men’s and Women’s team, is a major step forward in the progression of the ACA program. The roster for both teams will be bolstered significantly with an increased focus on road competition while still holding true to our founding principals of the “Live, Learn, Ride” culture.

“This has been a core focus of our team since we commenced and we are immensely proud that 12 athletes now live and train on the Sunshine Coast with 9 studying right here at the USC,” Ben said.

Managing Director ARA Products Stuart Harmer said “We were initially drawn to the Australian Cycling Academy (ACA) and the team’s ‘live, learn, ride’ philosophy. The ARA Group has over 2,000 employees and we are embarking on programs to help our staff make healthier lifestyle choices. Encouraging more of our staff to move on two wheels is an excellent way of reaching that goal and next year we will launch an inaugural two-day ARA Charity Cycle to raise funds for the ARA Endowment Fund. We are very excited to be naming sponsors of the new ARA Pro Racing Sunshine Coast team and look forward to our combined success.”

Key signings include National U23 Time Trial Champion, Liam Magennis, NRS winner Ryan Thomas, and experienced Pro-Continental rider Michael Rice, who joins the team following a stint with one of the world’s top development team’s in the USA. Rice is also the brother of Matt Rice, who gained several big wins with PRSC in 2019 and will continue with the team in 2020.

The team has also announced the re-signing of Michael Freiberg, who won the National Road Race title in his first race with Pro Racing Sunshine Coast in January.

Alistair Donohoe, who was a breakout star during the Herald Sun Tour and won several World Championship titles at the World Para-Cycling Championships this year, will also return in 2020.

The current track national riders who ride for the team will sit out racing for most of the year with their focus firmly on 2020 Tokyo Olympics gold but will still act as members and ambassadors of the team during 2020.

“This is a team that can compete across any terrain. The program will continue to combine a focus on selected national and international UCI races across Australasia and the USA as well the domestic National Racing series (NRS).”

“The ARA Pro Racing Sunshine Coast women’s team will feature new team riders in Anya Louw and rising Sunshine Coast star Maddy Lambooy, as well as continuing with 4 of the Cycling Australia Podium potential academy athletes which include local sports star Alex Martin-Wallace who will head the team. They will be targeting various NRS competitions around Australia,” Ben said.