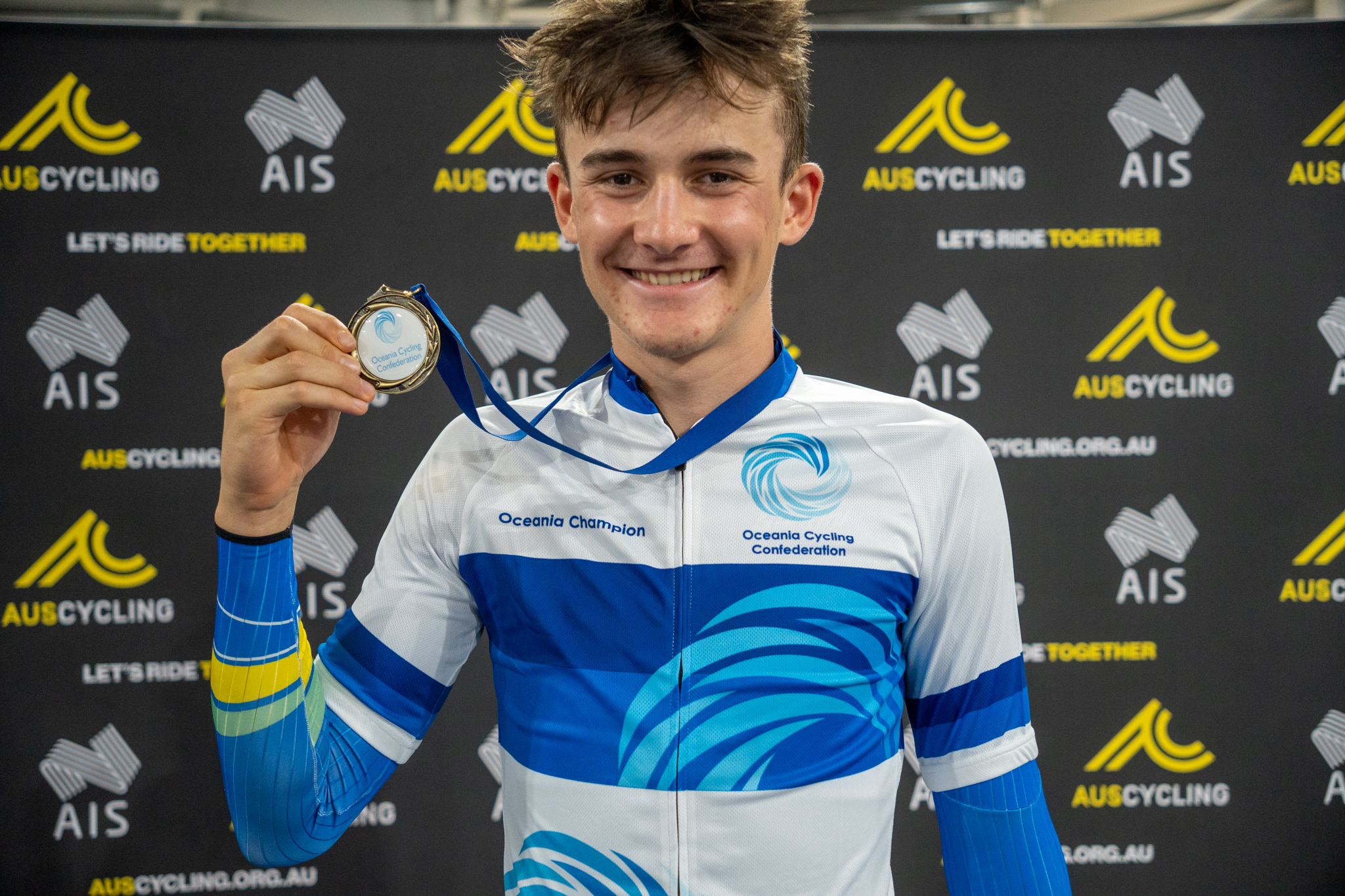 The 17-year-old Canberran added another accomplishment to his rapidly expanding list of statement performances in the junior ranks at the recent 2022 Oceania Track Cycling Championships in Brisbane, breaking Parker’s 2010 time of 3:13.958 set at Adelaide Super-Drome with a scorching 3:13.271 in qualifying.

The record-breaking ride was one not on the radar at #OceaniaChamps, mainly due to Rogers racing a small bunch race-specific program at the 2022 AusCycling Track National Championships just days earlier, electing not to chase the under-19 individual pursuit national title.

This fact, combined with the general mood of qualifying action, resulted in a surreal final kilometre of Anna Meares Velodrome for Rogers, who pushed himself to the limit to stay on top of his gearing on lactic acid-filled legs.

“Can’t say I expected it, I was coming in just hoping for a good time at least to maybe get gold but getting the record … I looked at the board and was like what the hell? It was pretty crazy,” Rogers said.

“I didn’t have much track experience coming into this year.

“Came in with one track session at New South Wales States and I almost posted a time in the final, but I ended up catching the guy opposite me so I didn’t get to post it.

“That made my coach (Glenn Doney) pretty excited that I was looking for a good time, so I came here and gave it a crack and got another lucky day.”

The current Australian under-19 road race champion was able to make it a perfect day on the Brisbane boards later that day by winning gold and the Oceania title with a time of 3:16.724 against South Australian Leo Zimmermann’s 3:19.062.

“I was getting a bit nervous that I was going to get a record but a silver medal, but it worked out,” Rogers said.

Understanding the magnitude of Parker’s record adds to the pedigree of Rogers’ performance.

The 2010 time was a world record at the time for 17-year-old Parker, who would go on to become a Commonwealth Games team pursuit gold medallist at Delhi 2010 eight months later.

Parker was also labelled by former AusCycling National Track Endurance Coach Tim Decker as "the most talented athlete I've worked with" in the aftermath of his shock retirement at the age of 20.

For Rogers, the new national record is just another step on the road in a burgeoning career he is keeping “fun”.

“Big things coming up but (I’m) just having fun along the way,” Rogers said.

Rogers, who rides for ARA Pro Racing Sunshine Coast, is one of 11 Australian juniors who will get a taste of life as a professional when they travel to Europe on AusCycling’s under-19 endurance camp next month, with a tentative schedule including UCI Junior Nations’ Cup events in France, Switzerland and the Czech Republic, as well as Belgian one-day races.