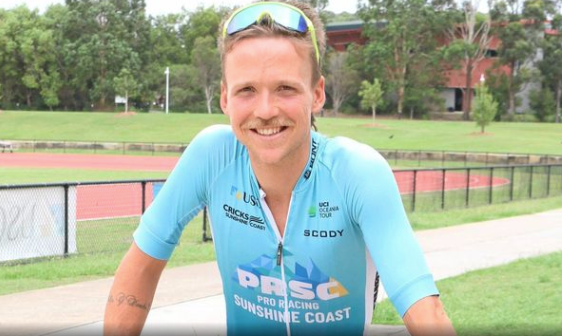 Para-cycling track world champion Alistair Donohoe is keen to take his good form to the road, with the Tour de Langkawi in his sights.

Now, he’s focused on next month’s Tour de Langkawi in Malaysia, a prominent stage race that includes some of the best road riders in the world.

Pro Racing Sunshine Coast will send a team of six and sprinter Donohoe is expected to press his claims for victory in some stages.

“I’ve got a bit of speed now coming off the track and I’m going to try to use that to my advantage,” he said.

“I might not have the endurance to play the long, hard game and to compete on the big climbs but there are a few good-looking stages with some nice, solid hills where we could really soften everyone up and then I should be able to go for it.”

Donohoe has limited strength his right arm due to a swing accident as a youngster but has emerged as a highly-competitive rider amid elite fields.

He finished fourth in the queen stage of the Herald Sun Tour earlier this year.

“I would love to come out of (the Tour de Langkawi) with a podium. The dream is to win one of the stages,” he said.

“There are a 150 people in the race who want to win stages and there are only eight stages so it’ll be incredibly hard but I will … really back myself and if the team has the opportunity to back me as well, then I’ll try and give it a red-hot crack.”

“Al can get over hilly terrain. Langkawi is quite lumpy so there should be some stages for him to do well in. We’ll have our other guys there helping him to do a fast sprint.”

Donohoe shaved six seconds off his personal best on the track last week and Kersten lauded his recent improvements.

“This year he’s had a bit of a resurgence here at Pro Racing Sunshine Coast,” he said.

“At the Sun Tour he did extremely well … he’s got confidence and he’s coming off the world titles and has speed in his legs so we’re expecting great things from him.”

Donohoe is renowned for his enthusiastic approach to cycling but Kersten said they’d scaled things back.

“The best and probably worst thing is his commitment,” he said.

“He just does absolutely everything and anything he can to be better and I think in the past he has pushed that envelope a bit too far.

“So we’re making sure he’s getting his recovery and he’s not doing too much extra and that he’s not focusing too much on his weight.

“That’s helping his power. He’s a lot faster and he’s well balanced and his head space is really good. I think he’s flourishing.”

But within 24 hours of arriving on the Sunshine Coast from the Netherlands yesterday, he had already done 10 hours of training.

“So that’s the focus of the team, to try and rein him back a bit. He just wants to be so good.”

Donohoe is based in Melbourne but is a rider for the University of the Sunshine Coast based Pro Racing Sunshine Coast and he visits the region for training camps.

He will be based here until they leave for the Tour de Langkawi.