Maeve Plouffe set to join the WorldTour in 2023 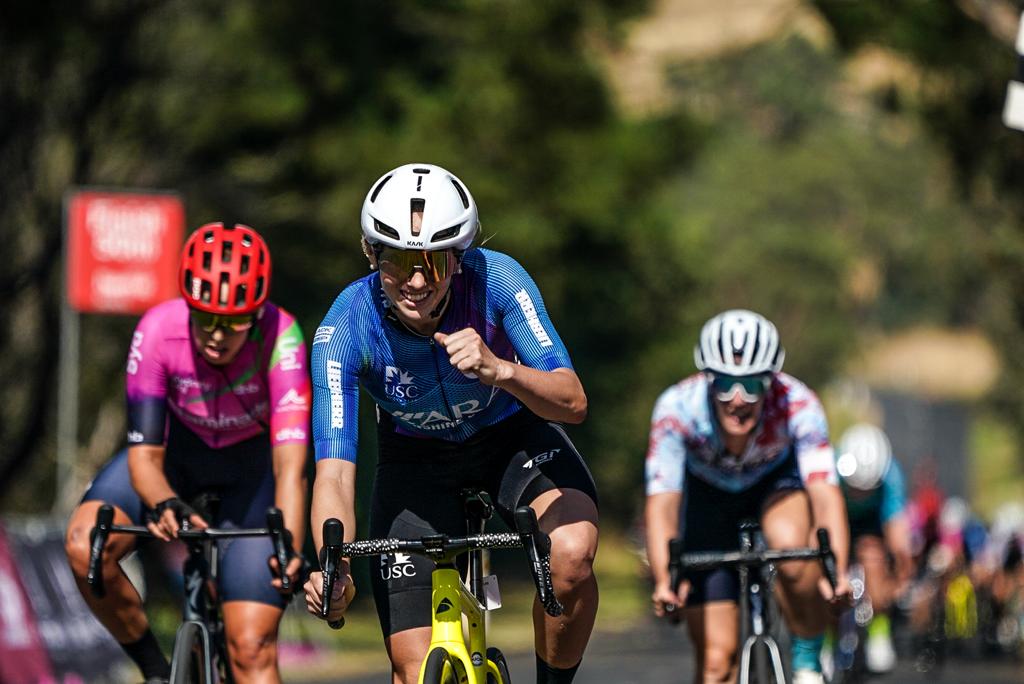 In an exciting week for the Australian Cycling Academy they’ve announced that Maeve Plouffe will join the WorldTour next year racing for Team DSM.

An Olympian, Commonwealth Games medallist, record breaker, star on the track and one of this year’s most promising road cyclists, it was only a matter of time before she was snapped up by one of the World’s top teams.

The seven-time Australian champion has sprinted to success in 2022 with stage wins at the Santos Festival of Cycling and Tour of Gippsland plus a strong victory at the inaugural women’s Warrnambool Cycling Classic before heading to Europe with the team.

Following up with a solid Belgium racing block with ARA Pro Racing Sunshine Coast, Maeve impressed with a win at Wilsele before making her way to the Commonwealth Games in Birmingham where she won gold in the teams pursuit and silver in the individual pursuit.

Currently leading the National Road Series she will wrap up her final season with ARA Pro Racing Sunshine Coast before heading to Europe in 2023.

Ready to race in her new colours Maeve said her time with the Australia Cycling Academy has helped shape and support her as a young aspiring athlete.

“I’m so excited to be signing with team DSM for the next two years! My seasons with ARA Pro Racing Sunshine Coast have been integral in making the jump from the Australian scene to the WorldTour!” Maeve said.

“Over the last few years, the team have offered endless support in the form of a high-performance environment, racing opportunities, equipment, and of course incredible friendships built along the way,

Each individual and sponsor on the team has gone out of their way to create an incredible training and racing environment, which I think is demonstrated in our recent successes both on and off the bike.”

Maeve hopes her signing help continue to highlight the possibilities for young riders.

“I hope that as I race on the world stage, I can be a positive reflection of the Australian Cycling Academy’s development of young riders. I also hope that this signing will continue to forge pathways for the next generation of ambitious athletes on the team who have dreams of signing professional.”

Australian Cycling Academy CEO Matt Wilson congratulated Maeve on the next big step in her career.

“Over the past 3 years we have seen Maeve go from strength to strength and it was no surprise to us that she has caught the attention of one of the top Women’s WorldTour teams in DSM.

We very much look forward to watching how she progresses over the next years while balancing her road and track ambitions towards Paris 2024." Matt said.

Based in the Netherlands Team DSM are excited to welcome Maeve, Head Coach Rudie Kemna said Maeve’s diverse ability, mindset and motivation made her a perfect fit for the team.

"Maeve is an amazing talent on the track, where she has proven that already by taking medals in various events at different championships and nations cups and is one of the fastest in the world in the individual pursuit,

On the road she's shown her speed too with a sprint win this year at the Tour Down Under event and we see that in her values she has potential to grow even further.” Rudie said.

“As she's mostly been a 'trackie' We want to help her transition onto the road in the coming years, help her gain more experience and nurture her talents. In our talks she also showed a great mindset and is someone that wants to continually challenge herself and progress as a person and rider."